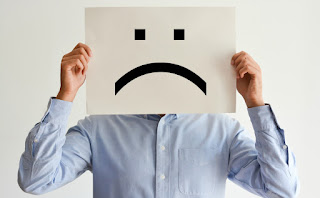 Happy people have what psychologists call “resilience.” It’s their ability to bounce back from adversity-to take a negative experience and turn it into something positive. Resilient people keep going even when tough times arise. And that can be a tremendous advantage in life. In fact, research shows that resilience is as important as intelligence in predicting how far someone will go in life. Here the 15 Habits of Unhappy People:

Unhappy people have a habit of bringing everyone else down, including you. Their negativity can be contagious and they tend to find something wrong in every situation. Even when there is no actual problem going on, unhappy people will point out how everything could be better, or use negatives from the past as a reference for what could happen in the future.

Unhappy people take things way too personally and let their pride get hurt easily. When something bad happens, unhappy people tend to beat themselves up over it… which only makes them more miserable. They hold onto their pride and refuse to admit that there is a problem in the situation with them, rather than focusing on how they can do something to fix it.

They Dwell Over Past Mistakes

Unhappy people obsess over their mistakes and think about the “what ifs.” They analyze everything that went wrong, beat themselves up for not doing things differently, and then end up reliving the pain over and over again. It’s a never-ending cycle. The result? More pain, more misery, and more unhappiness.

Unhappy people don’t like to give up control of their lives, even though it causes them stress and anxiety that they wouldn’t have if they trusted someone else to do things their way. They tend to be inflexible when they make plans and insist on doing things in a certain way even when it isn’t necessary or optimal for them or the situation at hand.

Jealousy is one of many negative emotions that unhappy people constantly feel and can manifest itself in a lot of different ways. Unhappy people are constantly comparing themselves to others, be it in terms of looks, personality, success, social standing-it doesn’t really matter. Jealousy makes them feel inferior and insecure because they always want what others have. They get jealous when someone else has something that they don’t or can do something that they can’t. It makes them feel like they’re not good enough… and those feelings of inadequacy lead to more unhappiness

They Care Too Much About What Other People Think

Unhappy people want other people to like them and will do almost anything to make that happen. They tend to be afraid of rejection, which is why they’ll hold back on saying what they really think. They also avoid taking a chance at something new because they’re afraid that it might not work out or fail miserably in front of other people.

Unhappy people are caught up in their regrets about the past. They feel guilty because they didn’t do what they wanted to, should have done, or thought they would someday accomplish. Guilt makes them focus on everything that went wrong and lets them think that it’s too late to fix things-which only makes them more unhappy. It’s the acceptance of these failures that makes them feel better as they move forward and realize they can’t change the past.

More unhappiness comes from unrealistic standards and expectations, which is why unhappy people tend to be perfectionists. They constantly think things should be done a certain way and expect themselves (or others) to do everything perfectly. However, there are no perfect people or situations in life… and that’s why unhappy people hold themselves (and other people) up to an impossible standard that they’ll never be able to reach.

Unhappy people feel like they deserve all the good things in life without actually working for them. They think they’re above everyone else and don’t see why they should have to follow rules or wait their turn when they can do something right away. No matter what the situation is, unhappy people believe that they deserve more than others.

They Don’t Make Time for Their Friends

Unhappy people tend to isolate themselves because they don’t have many positive interactions. They may go through the motions of being friendly, but they never open up to people or develop genuine relationships with them. That’s why unhappy people always feel lonely-because deep down, they are lonely.

They’re Always on Their Phone

People who are addicted to technology are less present in their lives. They get distracted easily because there’s always something else that can catch their eye. It may just be the latest news story on the Internet or a new text message, but whatever it is, it takes them out of the moment and makes them less happy… even if only a little bit.

Unhappy people are more cautious about the risks they take because they don’t want to get hurt or embarrassed. They may not do anything new or different, but stay stuck in their routine-which keeps them unhappy by making them feel like they can never improve themselves. Happy people on the other hand are more willing to try something new and different because they know that it can make them feel more alive.

They Try to Control Everything

They Never Learn from Their Mistakes

It’s okay to make mistakes because it can help you learn by experience. However unhappy people never seem to learn anything from their failures since they don’t like admitting that they’re wrong. They’ll blame someone else for messing things up or tell themselves that they could have done better if they had more time, instead of taking responsibility and trying something new the next time.

Unhappy people can’t be alone because it makes them feel unproductive and useless. If they’re not with someone or doing something, then they feel like there’s no point in being around. They may also be afraid of what they might think about when no one else is around to distract them… which means unhappy people don’t allow themselves the solitude that can actually make them more content and happy.

No comments to show.